A little sad to report I made the decision to turn of the server for Supercut due to the ever-changing nature of YouTube's unofficial get_video_info API that helps grab captions and the video download info, effectively neuters Supercut. See this Stackoverflow thread for the various iterations of solutions that have over just the past 2 months. Lesson learned: Unofficial APIs are not the most solid foundation to build upon!

This is a little write-up of my little project supercut.fun (link no longer functional).

I used videogrep a few months ago and thought it was great and was shocked by the simplicity of the core feature:

videogrep creates supercuts from videos by taking a keyword, scanning the subtitle file associated with the video, and chopping up the video according to the timecodes in filtered subtitles.

There are way more features and options than just that, but that's it in a nutshell. I wondered if I could replicate the core feature and make a web-based version. I made a NodeJS-based proof of concept of the core feature in under a week, then spent the next month on UI and fixing edge cases. Here's a quick write-up, on choices made and lessons learned.

I knew no matter how much I decided to limit the scope this had the potential to get beyond me, so I tried to be very narrow about the scope:

And of course, make it usable.

With that scope, I identified the technologies I would need to use. The two crucial packages were:

I also drew inspiration from Algolia's youtube-captions-scraper for getting the captions/subtitles. With those pieces in place, getting to a proof of concept was shockingly straightforward.

Language: I have been learning and practicing Typescript fundamentals on executeprogram.com and wanted to build a Node server with Typescript.

Hosting: The website is hosted on a Digital Ocean Droplet and videos are saved in an S3 bucket.

Front-end: The actual site was originally just a plain HTML5 form – I wasn't sure how much I wanted to invest in the front end, so I opted for incremental adoption of Alpine features for some simple reactivity. I really enjoyed it, and will probably reach for it for small, minimally-stateful apps like this. 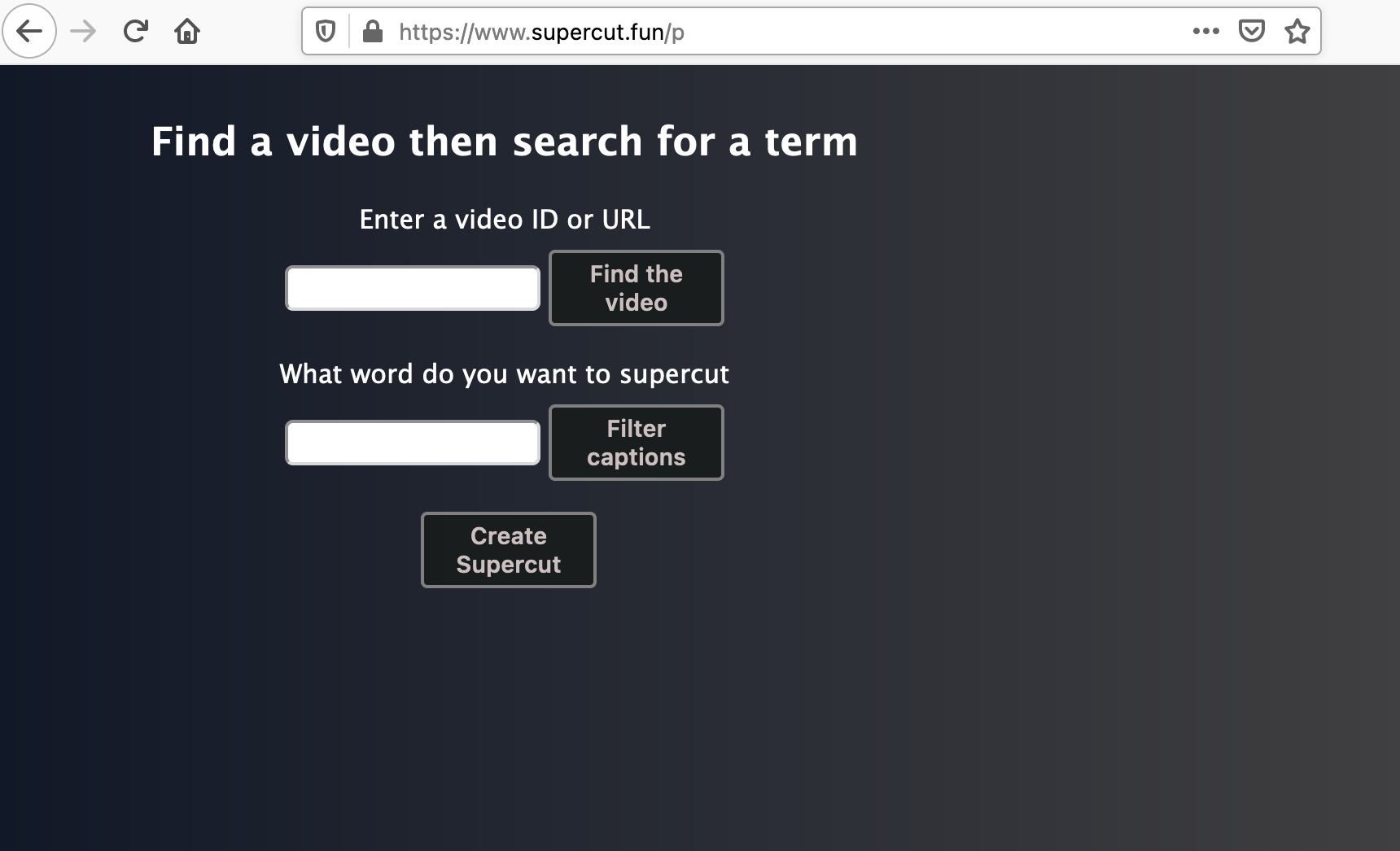 Supercut.fun in an earlier iteration, circa February 2021

Ten lessons learned is enough. There's probably more but these were top of mind.

There's not much else to say. There are still a bug or two that crop up occasionally and definitely still ways to optimize, but I'm not going to cling to this project until it's perfection. It will get there with regular love and occasional updates. I encourage you to try it out and send me your thoughts about it if you have any. <- Don't try it out, it's not up anymore! You can pick through the code instead here.