I had a simple desire: connect an AWS Lambda to a Postgres relational database, even though it's not completely recommended, based on what I’ve read (I read this). I was motivated to try this because I could imagine a scenario where I wanted to integrate a serverless function into an alread-existing app that utilized a Postgres DB. As things often go, I failed many times and started over just as many before I finally achieved my goal: read and write to a Postgres database in an AWS Lambda.

Serverless functions are, at their core, extremely simple. Configuration ends up being the biggest bugger. Still, there are a few things I assume in this tutorial:

Part 1: Setting up a Project with Serverless Framework

Give Serverless Framework your AWS Credentials

If you already have worked with Serverless and AWS Lambda this may already be configured. If not, let me say that much of the benefit of Serverless Framework is that it creates and deploys a lot of AWS resources on your behalf. To do, though, that it needs be able to access those resources, so there is some initial configuration that needs to take place. For that, insead of re-write their docs I'll point you to the Serverless blog which describes how to provide Serverless with those capabilities. It may feel like a lot of configuration, but once it's done we don't have to touch it again.

After you've gotten that done, it's time to create your project.

What we’re trying to do is connect an AWS Lambda to a relational database. So naturally you need to decide whether you’re using MySQL or Postgres. I chose Postgres. This will impact several of the steps later on.

To scaffold a Serverless project run in your Terminal:

This will create a folder called sls-new-project that contains just two files, handler.js which has your function’s logic, and serverless.yaml which contains all the configuration. Very minimal to start.

Setting up a local database and Sequelize

We want to use Postgres and an object-relational mapper (ORM) called Sequelize. So let's install those dependencies into our project via npm.

First npm init to create a package.json in our project. Then start installing some dependencies:

Because we’ll be running some migrations we want to use sequelize-cli to generate those migrations. We can run npx sequelize-cli init which will create a migrations folder, config which tells the cli how to connect to the database for each environment, models folder for our various models, and seeders. You can get the full instructions for initializing sequelize-cli here.

If you read the contents of the just-created config/config.json you’ll see it’ configured for MySQL. Few things to change:

We don’t have any models yet, but we’ll start creating them soon. But last step before that we have to create the local database: do so with the command npx sequelize-cli db:create.

If it fails, you probably missed changing something in the config/config.json file. Follow the steps above to make sure the user is the root user on your device, the database name is unique, and you’re using the correct type of database postgres. For now you only need to change those values under development.

For reference, here’s my config/config.json

When it succeeds you’ll see the message:

The link above can help with creating models too; for this tutorial we're going to leave that to the end, first simply ensuring we can make database connections successfully.

At this point your project file structure should look like this: 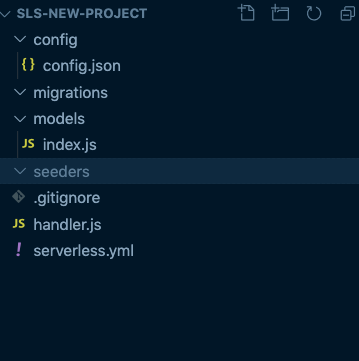 Connecting to the local database in the application

Okay, we’ve installed a lot of things and now it’s time to write some connection logic.

We'll do that in a separate file called connection.js, which we'll create at the root of the project.

You’ll notice a few things about the above code:

We’ve exported that connection logic, now let’s import it into our handler.js.

Delete everything that the serverless create command created earlier in this file and let’s start fresh.

We’re going to be using http triggers for the functions, so we also want to install the following packages:

Then require them in our handler.js

And now we can add a function to test our database connection.

When it comes to testing things, one of the most important factors is finding ways to speed up the feedback loop. It would be a shame if the only way to test our functions was by deploying them and seeing if they work on production. That’s why we’re going to install some more plug-ins.

Speeding up our feedback loop

The Serverless Framework plugins we use assist our development, serverless-offline to test our functions locally to speed up the feedback loop (crucial) and serverless-sequelize-migrations which takes our migrations and runs them on the production environment for us. We’ll use it a little later in our project. These aren’t npm packages, but plugins that we install via the serverless CLI then refer to in our serverless.yaml.

So first, from your project root run in the terminal the following commands:

Then go into your serverless.yaml file which we haven't touched at all yet.

You can take a look at all the different options that are commented out. I will only touch on the ones that are important for us now.

You can leave the server and provider configurations, and now we’re going to add a plugins section at the highest level of the yaml.

We can also change the details of the functions section to more accurately reflect what’s now in our handler.js:

This tells Serverless how to configure out AWS Lambda when we eventually deploy it, but also what options will be available to use locally, and how to access our function (via handler.index, where handler refers to what we named the file, and index refers to what we exported in module.exports.

Local Smoke Test and Next Steps

A smoke test just a simple test to see if things are working as expected. The logic of our only function runs Sequelize’s db.authenticate() function and prints whether it successfully connects or not.

To test, we’ll run sls offline which now starts a local mock of our serverless function. We can visit http://localhost:3000/dev/test to see if our function is successful. And if everything was followed correctly, you should see “Connection successful” or whatever your success message in the function was in the browser.

But, if you were to run sls deploy at this point and try this in production, it would fail because

That’s what we’ll do in the next post, as well as separating our environments.